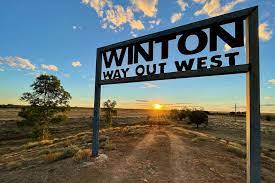 When our technicians are travelling out west, they will often take a left turn and drive south to Winton, the Dinosaur Capital of Australia.  With a population of less than 900.

The town was named in 1876 by postmaster Robert Allen, after his birth place Winton in Dorset.  “Banjo” Paterson wrote Australian’s unofficial anthem Waltzing Matilda at Dagworth Station in Winton Shire and legend has it that it was first performed in public at Winton’s North Gregory Hotel.  The Waltzing Matilda Centre  is a popular tourist attraction now hosting the annual Bronze Swagman Bush Poetry competition.

Locals say QANTAS (Queensland and Norther Territory Aerial Services) was conceived in Cloncurry, born in Winton and grew up in Longreach.

Winton is situated on the Great Artesian Basin, one of the largest artesian groundwater basins in the world.  Water quality is usually quite good though the pH may be high in some areas and the high sodium levels make it unsuitable for irrigation.

The water produced by the Winton bores are approximately 83-86 degrees Celsius – far too hot for use so it’s cooled to around 44 degrees Celsius through a radiator system and cooling ponds before being circulated for use in the township.  Sulphur gas is trapped in the water but if the water is allowed to stand to allow the gas to escape and then chilled, it can be sweet and clean.

The region’s low annual rainfall has made it ideal for sheep.  However, downturns in the pastoral industrial has forced many residents to consider new economic opportunities.  The bolder opal industry has contributed significantly to the local economy with the resolution of Native Title issues through an Indigenous Land Use Agreement for small mining claims.

Communication can be a problem when travelling outback.  It is recommended you are equipped with a satellite phone and a UHF radio.  Once you travel west or south  of Boulia, there is no mobile coverage at all, except via satellite.  The only mobile coverage received by Winton is Telstra 4GX and that is only in the immediate vicinity.  Telstra’s Mobile Broadband is accessible via the Telstra 4GX Network in Winton.